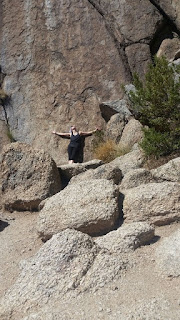 It's been two weeks since I moved to Arizona. Everything is unpacked, license, registration are updated, healthcare is in progress, and I even interviewed for a job out here. We've been on a couple of hikes, one of them over 12 miles with 2,500 feet elevation gain to Tom's Thumb and tons of sharp rocks on the trail. I found my first scorpion right outside the bedroom (inside the apartment) and I got bitten by a hornet (no fun, for a day I looked as if I was growing a second arm out of my left arm). Oh, and I had my first shooting lesson. I'll explain why in a minute, given that I'm everything but a huge fan of guns. 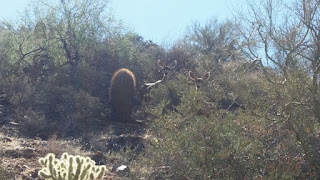 All in all, I've arrived. I think. While the above seems like a lot, I spend a lot of time at home with the dog. I am in no hurry to go out and socialize. Instead, I really enjoy the quiet and the slowness of my day. I have nowhere to be, nothing to do, other than reading some books and finish my assignments for the coaching class. Think about what to make for dinner every night. I even dress up a little when I pick up my boyfriend from work. Because I want to. And because he appreciates every single thing I do and makes sure I know that. Not because I've turned into Donna Reed.

I was close to getting a job out here that would have paid incredibly well and it wouldn't have been too difficult and stressful. Back in Tech, pretty much. But at a smaller, slightly different company. It seemed like a perfect fit and very tempting. I did not get it. For some time I was a little disappointed,  until I suddenly realized how relieved and happy I felt. In the end, I would have ended up in the same situation that I had left in March. Granted, with more responsibility and decision power, a slightly less stressful environment, but pretty much the same kind of work and situation. Torn between various stakeholders who all think they know best and want everything to be done by yesterday. Well, I know that I am good at jobs like that and it's very good to know that if nothing else works out, Phoenix is working on becoming the next Silicon Valley and they will always need an experience Product Manager for usually good salaries. But that would be too easy. Well, not that easy, given that I didn't actually get that job. But there are other things I can do, need to do. Coaching for a example. For a little while I was doubting if I really made the right decision to get a coaching certification. I don't really like people. Well, most people. And what I like even less than that is when someone needs or depends on me. So, why would I want to spend so much time listening to others? Well, it's the only way. The only way to make this world a better place. One person at a time. From experience I know how well coaching can work and what a difference it can make. I would never have been able to run a marathon with a pretty good time and without long term impact on my joints, if it hadn't been for my coaches. And even before that, my life changed dramatically thanks to a life coach. And I feel that I can be a good coach and give back.

Part of the coaching education is to pick a skill and get coached to do it. I had a little trouble finding something. Woodcarving or something along those lines seemed like not such a good idea. Given how good I am at injuring myself. Especially with knives. When I drop a knife, I try to catch it... And at least once a week, I look at my hands and something is bleeding. I cut myself on everything available to cut myself on. So any craft with sharp objects was not an option. Welding seemed like not such a good idea in a city where temperatures rise over 120 degrees (close to 50 degrees Celsius). Anything sport related that I want to do, I've done. The dog trainer I looked at was pretty far away and expensive. So we're just trying to train her with lots of treats to not eat other dogs' faces. And then I found something: gun shooting.

I hate guns. I think that this world would be a much better place without them. I will never understand gun fanatics and I think that access to guns and ammunitions must be tightly controlled. If  the chances of a suspicious person carrying a gun are low, as they are in countries and states with tight gun control, police officers or others are less likely to pull out their gun and shoot them. Anyway, I realized that a world without guns is something that is never going to happen. Or a world without injustice, hunger, equality for any kind of person, violence, bad drivers, and so on. Hence, I would have to find a way to live with them. And not just that. Given that there are so many guns in this country, I better know how to handle them. Know how to make sure that they won't harm anyone. That's what got me to pick gun shooting as the skill I want to be coached in. An almost bigger barrier to do that was that I am also terrified of guns. The first time I saw a gun, when I was 16, I almost threw up. The first time I shot a gun, a few years ago on a clay shooting range, I felt sick for a while afterwards. The sound, the way it felt, when a shot was fired, and the fact that we shot moving clay pieces that were made to look like bunny rabbits or birds, made me feel nauseous. Compared to shooting, riding on an interstate at 80 miles per hour or crossing the country on my bike by myself seems like a walk in the park. During the day. In a better part of town :-). So, what is the best way to overcome your fear? Well, to face it. 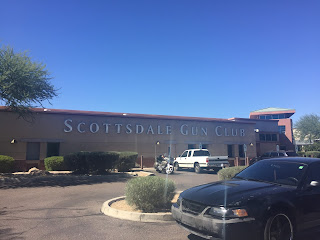 And so I went to the Scottsdale Gun Club, on Thursday, for my first gun shooting lesson. Slightly nauseous and apprehensive. The front store looked pretty much like I expected it to look. All kinds of guns and ammunition everywhere. Mostly men, some in outerwear and with large pickup trucks. But others, too. My trainer made a very friendly, competent, patient, and reassuring impression. He reminded me of my Dad. Which is always a good sign. Plus, the waiver he had me read and sign made me feel a lot better, too. Alright, I thought, they do know how dangerous guns are and are taking a massive amount of precautions. That is good. Consequently, the first part of my lesson was all about safety and how to handle the gun. We started with the four rules of gun safety:

Personally, I don't think they're phrased very well and need more explanation, especially 1. And 2. and 3. could be combined into one rule. But it's good that someone thought of them. Once we had covered them all and I had learned what every switch and part of the gun was called and operated and how to hold the gun, aim and press the trigger, we went to the gun range to shoot. The gun we used was a Glock, 9mm. It did look a little bit like a toy. Until we got to the part with the real ammunition. The killing kind. So I loaded the gun, made sure I had the right grip, aimed it at the target and slowly moved my finger on the trigger. Very slowly. Until the shot went off.

It's loud. So loud. The backlash was less than expected, but in order to hit as close to your target as possible, you need to be surprised by the shot. So you don't just push the trigger, you gently press it until the gun goes off. Which makes it a little weird and even louder and more terrifying. After the shot, you're supposed to keep your finger on the trigger, readjust your aim, and shoot again. However , after each shot I wanted to put the gun down, sit down, and calm down for a few minutes. But no, eventually, I kind of got the hang of it and shot the last round, one cartridge after another. Apparently, I don't suck. Which means that the sniper career I had thought of, is not that far out of reach, anymore. Beware, bad guys! ;-).

I stil don't like guns. But I feel that the more I know, the safer I will feel around them. Given that this country is full of guns, it can't harm to have one more person who knows how to handle them safely. And when I argue for stricter laws, at least I know what I'm talking about. Furthermore, I was able to do this despite my fear. Which is still there. I feel apprehensive and scared around guns. But I already started to feel a bit better, knowing how it works and how to handle it. Like the fact, that a properly working gun won't go off when it falls on the floor. It might if you try to catch it and accidentally press the trigger. Like the knives. Let them drop and make sure your feet or pet won't get hit. But don't catch it.