Right now I am in Boulder where my bike will get a well deserved service today. She's done such a great job. Over 8,600 miles (13.800 km) in less than two months! Boy, I just realized that myself. That's almost 150 miles (241 km) a day. Given that I took quite a few days off, that's a lot more than I had planned to ride each day. Adding more statistics, I have lost 8 pounds and spent way too much money. And I made more friends. 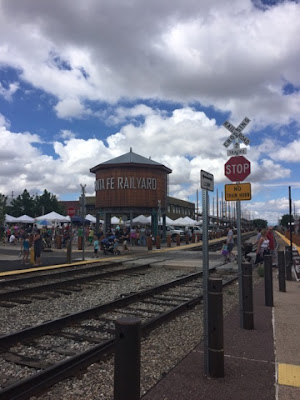 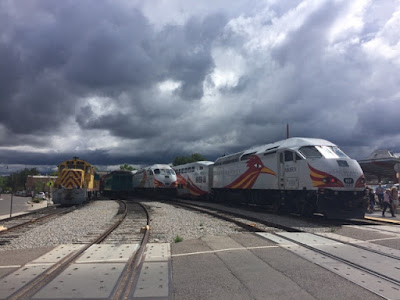 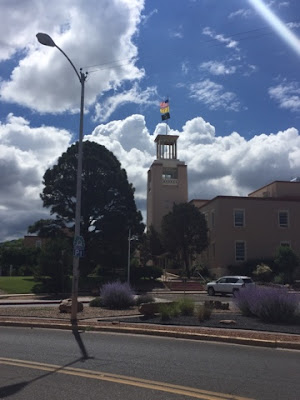 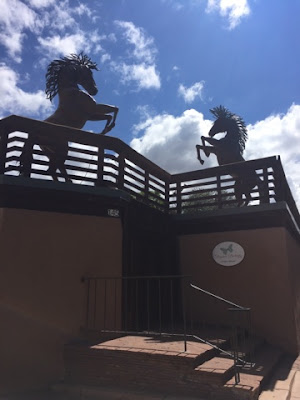 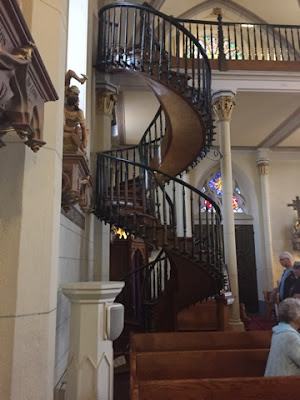 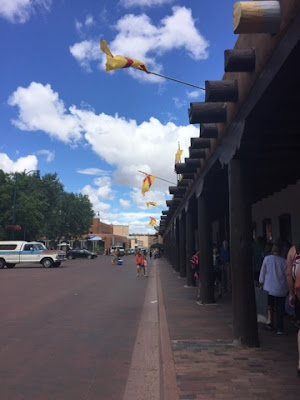 Friday and Saturday I was in Santa Fe. Saturday I walked to downtown and took a stroll through The town to check out the main square and the famous free standing staircase in the Loretta Chapel. And then I made my way to a sports bar to watch the most important event of the day: Germany playing against Italy in the Euro 2016. Germany had never been able to beat Italy in a World or Euro Cup and I remember a few traumatic games. One when I was 7 and they beat us in the World Cup final. I made my father promise that we'd never travel to Italy again after that.

And because most Germans are not extremely optimistic I kept hearing how hard if not impossible this would be. While I knew they would win. There's always a first for everything and the team was strong enough and most importantly, they're having fun on the field.

The bar filled up with a bunch of fans of both teams and I ended up with a small group at the bar consisting of a German pilot with his American colleague. They reminded me of Mel Gibson and Robert Downey Jr. in Air America. And another American who used to be married to a German woman. And right behind us was a group of Italy fans.

Given that this blog is not about football I'll make it short. Germany won. In one of the most suspenseful penalty shoot outs I've ever witnessed. And the Italy fans left the building within seconds.

The pilots and I went to celebrate by going for a swim in a lake about an hour away and after that, visiting an old friend of theirs, Brad, who's been through and has seen all kinds of unbelievable things working as a peace negotiator in Africa. And now he lives in the middle of nowhere in New Mexico with a dog and horses and good friends who visit. 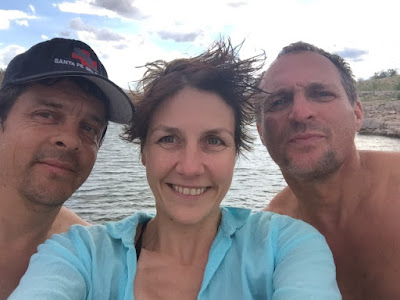 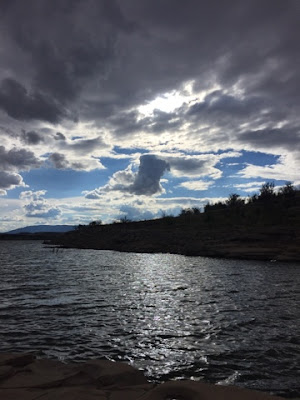 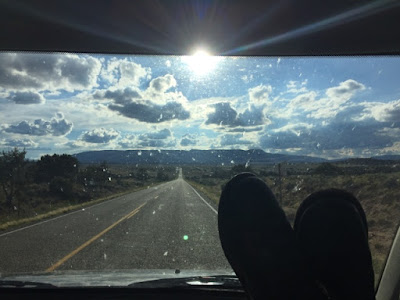 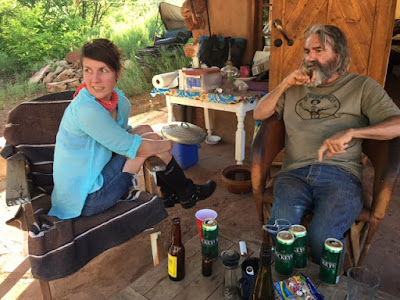 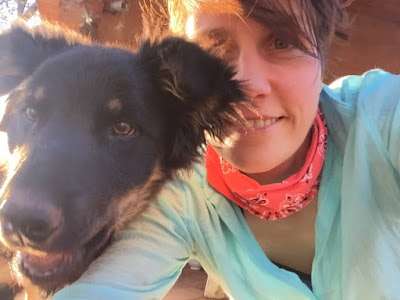 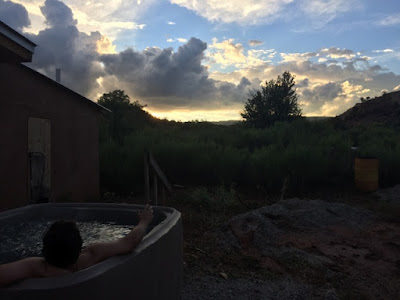 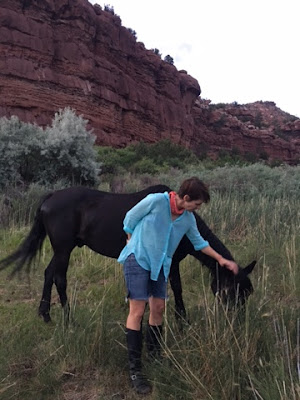 Not the worst place to live. Despite the mosquitos. Who got far outnumbered by the stars that night, though. What a perfect way to celebrate this magical day where football history got rewritten! Thursday I'll watch France going through the same.

The next day I started pretty late and rode through the beautiful high plains of northern New Mexico and south Colorado. And towards a bunch of dark clouds on the horizon. I don't mind he rain so much, given that the roads where straight and easy, I was wearing my gear, and the rain didn't last as long as it does in California. And I dry off quickly. However, when there's lightning and even some hail and you can't see any shelter on the side of the road, it gets quite scary. After the first gush, right when I crossed the border to Colorado, I checked the weather again and it looked as if there was no dry way to get Salida, my destination. And yet I kept going. 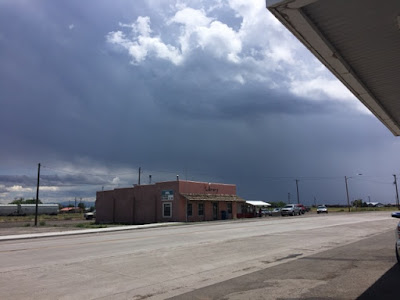 The first rain I rode through.

The weather was nice for a while and I got closer and closer to the mountains. I would have loved what I saw there, if I had been driving a car. Preferably 4WD. Dark clouds were hiding the mountain range. Strong rain and lighting came of of those clouds left and right. And I was still more than ten miles from the next town. I went faster and faster, riding against strong winds and hoped to make it before I got hit by lightning. And I did make it to Moffat, the last town before I had to go over the pass. I found a sheltered place next to a cafe where I parked my bike and checked the weather again. And finally, after talking to the cafe owner, seeing her face when she considered going over the pass on a bike in a thunderstorm, I decided to find a place to stay on this side of the storm. So I rode a few miles to Saguache, not without getting hit by another hard rain shower. There I got a room in a lodge that seemed to be run by mosquitos. I've never been bitten so often in such a short time. Even in the morning when it was cool outside! 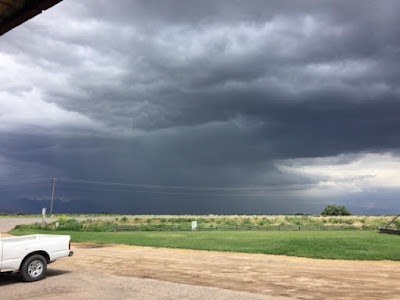 But still better than having to ride across a 9,000 ft pass in this!

The next morning, it looked so much better: 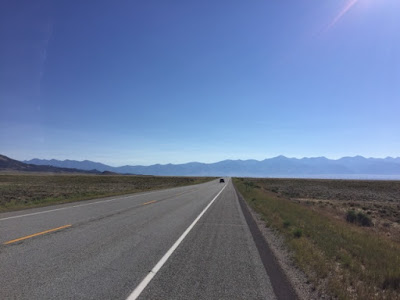 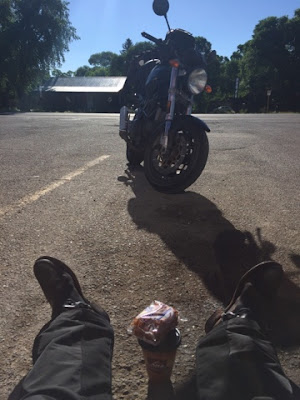 And after a breakfast for champions at a gas station, because everything else was closed because of 4 July, I rode towards the mountains, dressed warmly for a change which turned out to be a good idea for most of the ride. Which was as beautiful as it gets in southern Colorado. A high plateau and straight and curvy roads. Mountains everywhere like Mt Ouray, many of them with leftover snow. And again I was reminded of similar, yet far smaller places in Europe. This time it looked like the Swiss mountains.

The day ended with a run and dinner and fireworks watching from the Red Rocks trail with a former colleague and some of his friends. I love seeing familiar faces when I'm on the road. The fireworks was nice, too. And the location and view spectacular. 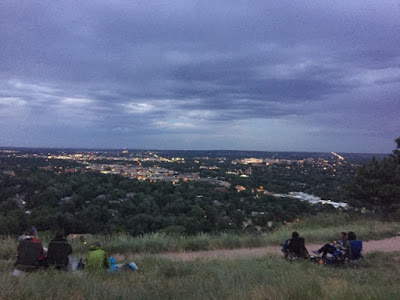 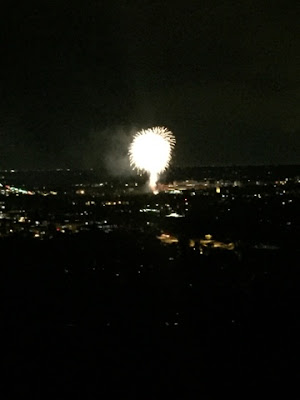