In the last few days I spent a lot of time looking at various weather apps, trying to figure out how best to get to New Orleans from Dallas without getting washed away off the road or hit by lightning. By now, however, I should know that these forecasts keep changing by the minute. In Austin there was no mentioning of rain until it started raining. The apps still said "light rain" but changed that to "rain" soon. "Torrential rain, blinding lightning and deafening thunder" would have been the appropriate term. Easy to see why I'm a little concerned to plan a 500 mile ride through cities with "chance of thunderstorms", "thunderstorms" and expected "26mm" precipitation. Who knows what will happen while I'm on the road. The "Thunderstorm" might become a full blown tropical storm or tornado. Yay!

After a while I had over 20 towns listed in the three apps I'm using. And I kept switching back and forth between them, between forecast and radar as well as maps to figure out the route I should take. The fact that the forecast changed by the second didn't help at all. I bet, someone has already found an algorithm for finding the "least wet route". And with a few more computer and data science skills I could probably come up with one, too. But that would take all the fun out of it.

Meanwhile, I am in New Orleans. I made it. And with only about 20 minutes of rain. First of all, I would never have made it in one day. So I left Dallas yesterday evening, after I got my bike back from the garage. They did a really good job. It felt like a new bike! With all those new and shiny machines everywhere it seemed like the whole team had be craving for something real to work on. Like my 16 year old Monster that just rode 4,000 miles across the country.

And I managed to leave Dallas dry and arrive dry and only a little bit after dark in northern Luisiana. If you ask me whether I prefer to ride in the dark or rain. I'd pick the rain. The dark is just scary. But at least, I had 180 less miles to go the next day. But from what I could tell from weather planning, there was no way for me to leave the town dry. And so I packed up at 7am, put on my rain gear and hit the road. And 10 minutes later, I pulled off the freeway and stopped at a gas station. I wasn't able to see anything. Even with the little vizor wiper. That thing actually seems to make things worse. I feel if I just moved my head left and right the water would flow off the helmet. But well.

I stood there in the downpour and even considered, albeit briefly, to forget New Orleans altogether as it seemed that there was just no dry way to get there.

But as the rain in Shreveport wasn't going to end any time soon and it looked like it wasn't raining a little farther away from the town, I just got back on the bike. I though of going east for a second, which would have added 50 miles and another state, Mississippi, to the total trip but it looked drier. But then, when I got to the ramp south, I saw the sun between the clouds. And so, considering this a sign, I went south on 49, towards Alexandria. And it did stop raining after a few more minutes. And even if it hadn't, the road was smooth and there was little traffic which would have made riding in the rain relatively easy.

At one point I thought I'd exit and get gas. After two miles of going west I stopped to check if there actually was a gas station anywhere close. It was, but 6 more miles west. If I'd stayed on the interstate, I would have gotten to a gas station just in time but I didn't know that. When I was at the pump, it started raining! But after I raced back to the interstate, the rain was gone.

So the whole ride was practically a race against the rain. I kept looking back at the huge dark cloud west. It came closer but never close enough to rain on me. Well, until 20 miles before I reached my destination. I had taken off my rain jacket but kept on the rain pants. I just felt safer on those busy roads with huge cars with some clothing in neon color. But it got really hot in them. At one point I made a turn to reach the 10 interstate, against the will of google maps who kept yelling into my ear that I should make a u-turn. I heard the word 'u-turn' at least 10 times within a minute. I didn't really get it because the road I chose was supposed to get me to the interstate that was going to take me to New Orleans. But once I saw the ramp, I did understand the urgency in the woman's voice. The ramp was packed and the cars were not moving at all. And that was when I remembered the other factor I should have included in my "best road to ride" algorithm: "traffic". At home in San Francisco that would have been my most heavily weighted factor. Here, I didn't even consider it. But it's important. If you get stuck in stop and go traffic at 90 degrees. In your rain gear. Or full gear. That's no fun. The bike and you need to move in order to cool down to a moderate temperature. The bike is oil cooled which requires the motor to run at a certain rpm and I'm air cooled which requires us to move at a speed higher than walking speed to be halfway comfortable. Stop and go on a freeway at 90 plus degrees won't work for us. She will heat up and let me know which means I'll be sitting on a hot oven in full gear when it's 90 degrees outside.

So I turned around and went back to the road, google maps had so violently advertised. And it turned out to be less traffic and it looked like I could still beat the huge black cloud that had built up behind my back. And I did for a while. Only 60 more miles to go. I felt like "John Maynard". "How many more miles to Buffalo"... But then, I saw this dark cloud appear in front of me. Out of the blue sky. And I saw steam rising up from cars ahead in the opposite lane. Rain. And at first I thought the rain was over and it was just because the road was wet. But then the rain started hitting my arms and chest. And I felt so good. Finally, I cooled  down after sweating for hours. And the rain only lasted for 10 minutes. And then I was chilled and even able to see properly. The road wasn't flooded and I was almost there, anyway.

By the time I turned into my motel's parking area, I was dry and warm. And so happy to have made it before the storm. 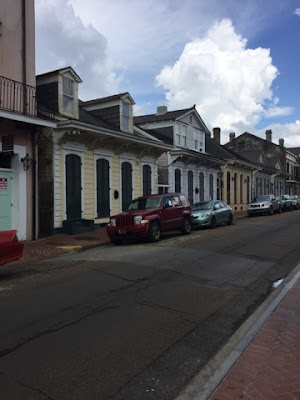 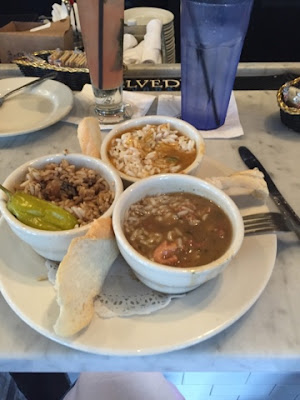 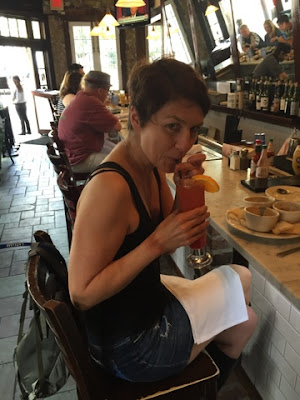 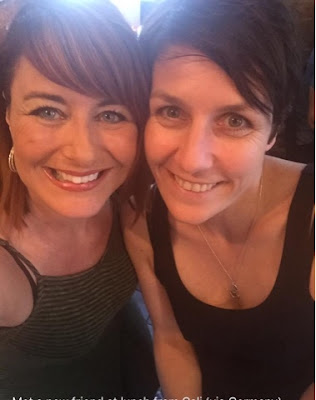 Now I'm in downtown New Orleans. In the same bar since the early afternoon. With this lovely woman from Dallas whom I'd never met if I hadn't taken this trip. Just one more reasons I'm glad to have done it. So many so far.