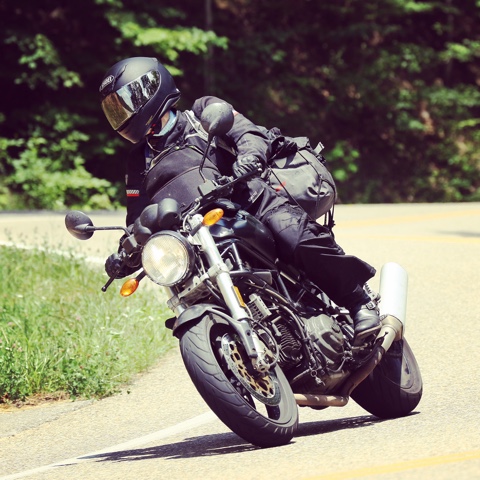 Riding the Tail Of The Dragon

And I am back in the humid heat. And sweating accordingly. Yesterday morning I packed up and stopped by Eurosport Asheville, a motorcycle dealer (BMWs all over the place. I was almost surprised they didn't speak German) and repair shop to get some air and my chain adjusted before the ride. We had tried this the day before but the nut was impossible to get lose. It took those guys just a few minutes and they wouldn't even let me pay for it. I love North Carolina's motorcycle mechanics almost as much as I love mine at home. And yes, why don't I do these easy things myself? Exactly because I've had so many pleasant experiences with bike shops on my trip. And if I were a mechanic and someone as nice as me would walk into my shop and ask me for a tiny thing to do on my bike. It would be a great pleasure and probably one of the best things that happened to me during that day ;-). I know, if I wasn't so humble I would be too good to be true... 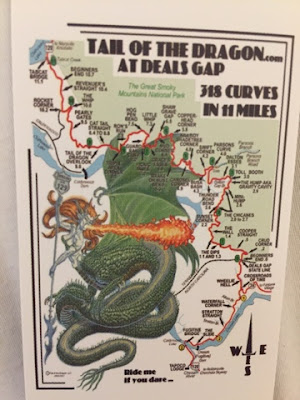 It was the big day where I was finally going to ride the 'Tail of the Dragon' (there are plenty of related scary YouTube videos you can watch if you're interested), or Deals Gap, a stretch of 11 miles through the south of the Smoky Mountains with 318 curves. I read about it in one of the motorcycle journal books I read and couldn't wait to go there. The road to there was beautiful already. Windy highways, some nail pin curves and a lot of scenic views of Fontana Lake. I was a little nervous, given that my curvy ride down to Asheville the day before hadn't been the most confident and elegant. And I had heard and read a lot about the road. So, when I had stopped and purchased my obligatory tank top I let the chicken inside of me take power and I left the parking lot following a group of Harley riders, two of them hadn't been on the Tail before.

Stupid mistake. Even a less savvy rider with a sports bike would be able to do the ride faster than most Harley riders. And I've ridden similar roads before and the road didn't turn out to be impossible or scary. No alpine switchbacks. Just a few beautiful hair pins. So I stopped three times to let the Harleys go and ride a little faster until I had caught up with them again. Boy, that was so much fun! There was a slight descend which explained that more people we're riding it coming from the other side but not enough to be scary (for me). Little traffic, no gravel or other stuff on the road and perfect weather helped to make my first Dragon ride one of the most fun experiences of the trip.

But the best part happened after I had done the 11 miles. I was about to turn onto a different highway and not going very fast when I saw something move in the bushes on the left side of the road. And then a black bear cub jumped on the road right in front of me and tried to cross it. I couldn't believe my eyes. And luckily, I was able to break and sverve to avoid the little guy who hesitated for a second, jumping back and forth on his front paws that were still too big for him and made him look like an oversized pup, before he ran into the woods on the other side of the road. Where his mom must have been.

I had to stop at the diner a few yards down the road to process what had just happened. And be happy about all the things that didn't. I had seen my first wild bear. And it was the cutest little cub. And I had almost hit it which would have had the most serious consequences for all of us. Killing an animal, crashing my bike and most likely hurting myself would be bad enough. But an attack by an, understandably, angry bear mom on top of that. Once again I was happy about my defensive-attentive driving style. And so much happier to have slayed the Dragon and seen but not slayed a bear within half an hour! Hence the slightly exhausted but immensely happy face: 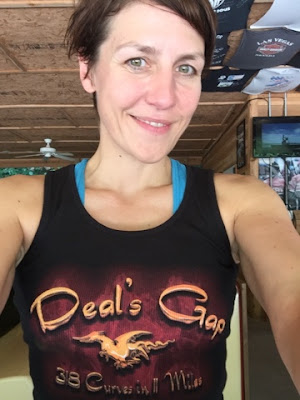 The rest of the ride was easy but again incredibly hot. I spent the night at a very quiet resort style hotel at a lake, seeing more fireflies and spectacular thunderstorms. The perfect retreat before a weekend in Nashville where I am right now. In a British Pub, drinking my pain away about the fact that the stupid people seem to have finally managed to outnumber the smart ones in this world. 51.9% to 48.1%...