Yesterday, I crossed the border to Texas. The ride was pretty easy. Only 250 miles and Beth had my luggage in her car. However, heavy winds and an army of rabbits and hares that must have been half lemming the way they darted across the highway right in front of cars. Highway 90 from I10 to Marfa was covered with their carcasses. One would think those served as warnings to watch out before crossing that piece of, obviously deadly asphalt. But every other mile another harakiri bunny tried his luck. A few times I had to break or swerve. And not just the bunnies posed a danger but also the huge vultures that feasted on the abundance of fresh roadkill. One time four or five of them were sitting in the middle of the road, picking away at road kill. I started honking a bit away. At first I thought they wouldn't even get out of my way until they slowly realized that I might be more dangerous for them than I looked and slowly started flying away. The last one left just a few meters in front of me.

The wind had been quite heavy with a few gusts. At one point, one of them got me so heavy that the bike almost moved into the other lane. With hardly any traffic that wasn't really dangerous but I became even more alert. And hoped to not encounter of a combination of wind, bunny, and oncoming traffic at the same time.

When you do a Google image search for Marfa, Texas (on the map it's south east of El Paso, very close to the Mexican border), you will see a lot of photos of a Prada store in the middle of nowhere and people posing in front of it. That store is an art installation and actually almost 40 miles outside of Marfa. Naturally, I had planned to get our (bike's and mine) picture taken in front of it. But I almost missed the little house by the road. 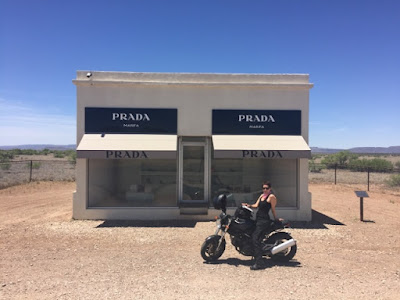 In the evening we left town with Shane, a friend of Beth who had kindly offered to take us to Pinto Canyon, 40 miles southwest of Marfa, 10 miles of that rough and steep gravel road. The driving turned out to be less uncomfortable than I thought it would be. 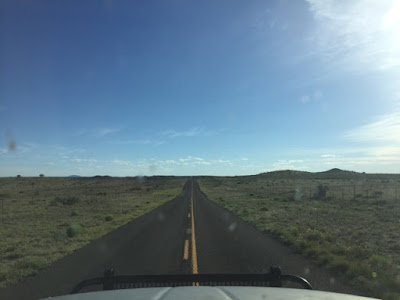 And the trip was most certainly worth it. Along endless acres of farmland, where you can spend a day on a horse and not find one cow! And once we drove downhill into the canyon with the evening sun, lots of beautiful views. 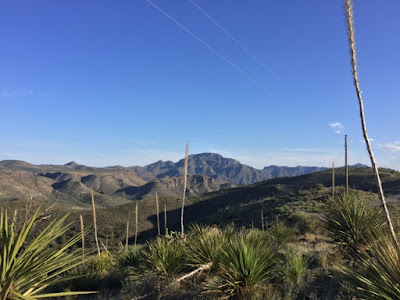 Eventually, we got to what is left of Rio Grande at that point and sat down with our beers, enjoying the sunset and the warm evening air. Once the bats came out, the mosquitos finally stopped biting. 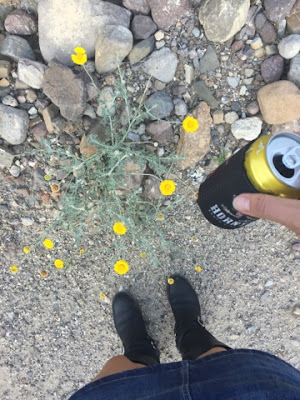 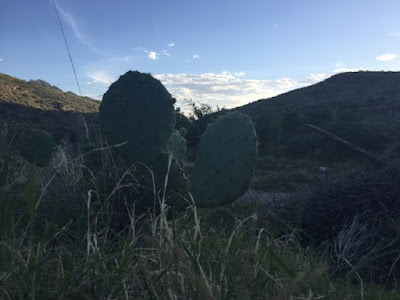 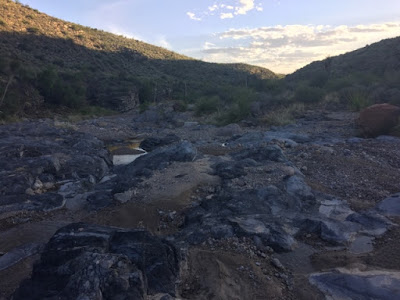 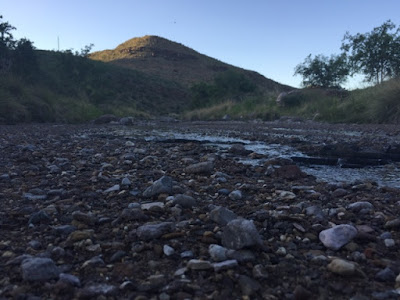 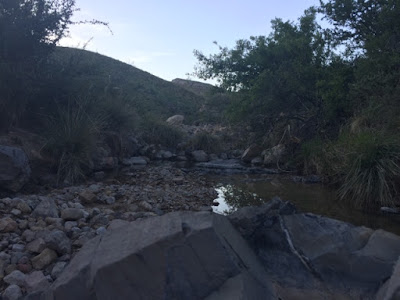 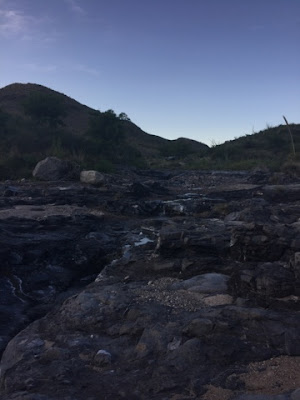 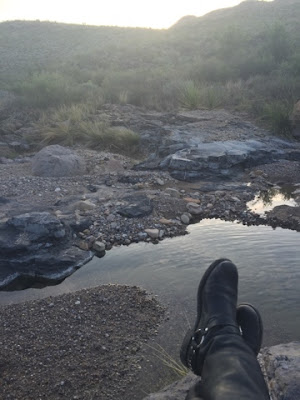 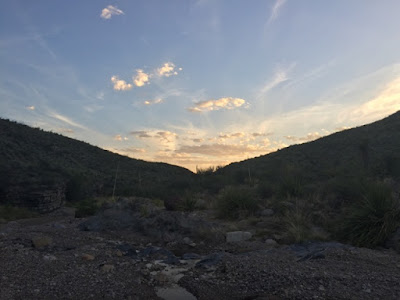 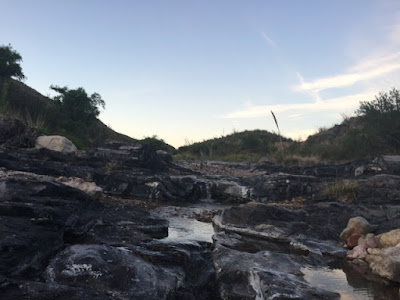 And then the stars came out. So many. We lay on our backs on the warm rocks and watched them appear and glow, unspoiled by any artificial light so far away from the next town. Inspired by their lights, an army of fireflies was glowing and blinking away all around us. These guys are so magical. I wish I could be glowing in the dark. Well, I guess if I eat enough fish caught in the pacific, I eventually would...

Shane killed the mood a little when he said he regretted not bringing his gun, given that we were at the main waterhole in the area and he didn't want to encounter hungry mountain lions. Those are the few situations where I am actually pro gun. Although I feel that the three of us could have probably scared one away without having to hurt him. But still. We used a flashlight to look around us to see if there might be any. I don't know, but until then in the dark, I felt comfortable and not scared. But once we illuminated the area, I kind of expected to see all kinds of predators prepared to charge, kill and eat us. But none could be seen.

Still, at 10pm we made our way back to the car. Using the flashlights to make sure we won't break a leg in the creek with all those rocks. When I shone my flashlight on the rock in front of us we were about to step on, I saw this pretty guy: 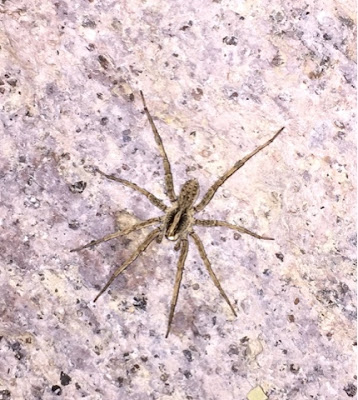 A wolf spider. At that point I was glad to have the light and didn't step on him. When we drove back, the moon was rising over the mountains and shone his soft light on fields and hills. And the dead bunnies we left behind. And even one or two hawks came so close to the car that we actually ducked our heads and could see their feet. 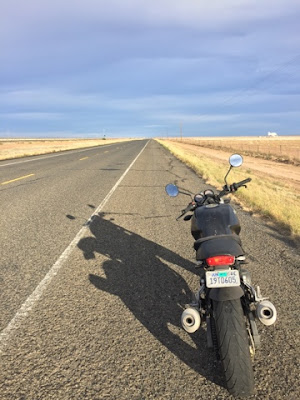 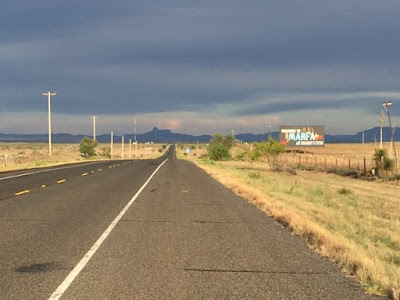 Now, after an evening ride I am sitting on Beth's patio while the air is getting cooler. This part of the country makes me forget how crowded and loud San Francisco is. It's what I needed so much. Quiet, wide, open, and empty. Well, except from Cowboys, snakes, mountain lions, and a bunch of huge bugs: 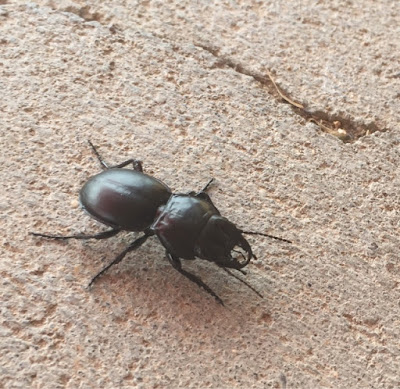