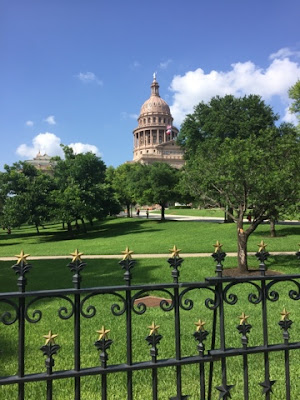 Still Texas. And who would have thought that Texas would be so green and beautiful. Certainly not I. Today I rode from Junction to Austin. A short ride of 170 miles. Junction had already been way greener and more humid than Marfa. The last proof for that I got when I talked to the guy in the pizza place while my, surprisingly great pizza for a gas station-like shop-in-shop, was in the oven. Within a minute I got bitten 5 times by mosquitos. Texan mosquitos are so incredibly efficient. I almost like them...

I chose to ride on highways instead of the scary interstate. Even on highways you can go 75 mph here which is more than enough for me, given the wind and the shitty state the Texan roads are in. It makes me wonder, is that because of all the huge 4-wheel-drive trucks that people drive or do they drive those trucks because the roads are so shitty? At 90 miles per hour with strong winds, you don't want the smooth pavement to just disappear from under your wheels.
That's no fun. The highway was a little better, not quite like Californian or Arizonan highways but at least there was significantly less traffic. Despite Memorial Day Weekend.

The scenery left and right of the road was very beautiful, though. Green meadows, hills, farms that already had the pretty southern style with porches and swings on oak trees, lots of green trees and yellow, red and orange flowers along the road. And sometimes whole fields of orange framed by green. I wanted to take a photo for my friend Tracey, who loves orange flowers so much. But there never was an option to stop at the right place. So I'll just have to describe it for her.

I love the San Francisco climate. It's predictable, not too hot or cold, you can get hot when you want to, it's hardly ever too hot to sleep. It's dry so you don't get drenched in sweat after walking for two minutes. And I could live with desert climate, I think. But humidity kills me. But at the same time, it gives me this warm, fuzzy feeling that you get when you come across something that reminds you of the endless summers of childhood. And hot, humid summer nights do that for me. 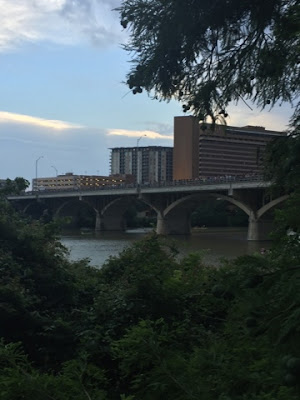 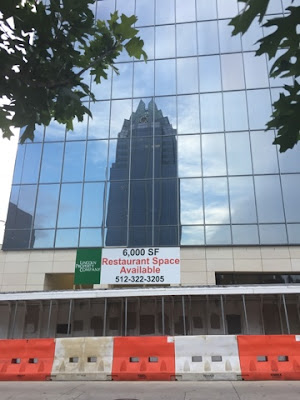 Now I'm in Austin. I've heard so much about this city. And it falls into the same category as Portland, Oslo, and even Sydney. Walkable, close to a body of water. It even does have a nice promenade and trails along the waterfront. Good food and great bars as well as a lot of really nice people. But there are so many ugly hotels everywhere. Particularly along the riverfront. And it's a big party town. Like San Francisco. It's different from the rest of Texas and maybe, I just haven't seen enough of it, yet. But I'm not quite blown away. Well, I do like the thunderstorm that's raging outside right now. Far enough away to not cause flooding and mayhem but loud and bright enough to enjoy from afar.