Yesterday morning, I left Phoenix at 6am. And again, the prospect of having to get up at ass o'clock didn't help me to fall asleep. So with barely three hours of sleep, two eggs on toast and coffee made by precious Susie who had gotten up extra early to have breakfast with me and send me off, I packed and mounted the bike and headed east towards Las Cruces and New Mexico. I felt a little sad because I had come to like the town and the people and wouldn't have minded to stay a little longer. But I have a country to cross and an ocean to reach. 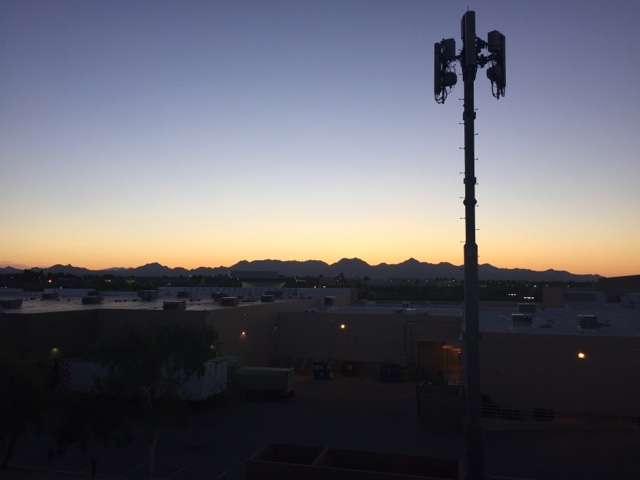 The route I had chosen would have taken me through the mountains and to Las Cruces after roughly 380 miles. However, at the first stop for gas I found out that the highway ahead had been closed due to an accident and I wasn't able to find out for how long and if there were roads close by the area to circumvent the closed part. So I decided to take a detour that would take me to Tucson and the I10. Adding over 100 miles to my trip.

The road to Tucson was beautiful, though. Windy roads with views of mountains and stunning rock formations. And at one point I saw some birds running across the roads. Road runners! They really do look like the Road Runner. Meep meep. Once I got closer to Tucson, the road became less nice, 4 lanes with traffic lights and lots of cars. But eventually, after 230 something miles I made it to I10 and stopped to get gas, eat a snack, fill up my water and shed some layers. And off I went onto the interstate and an additional 280 miles.

Yes, I rode 510 miles in 9,5 hours. I'm gonna call that an "Iron Woman". I certainly did wish for an iron butt a few times. And I was more than glad to have had rested in Phoenix for a few days or otherwise I wouldn't have made it. 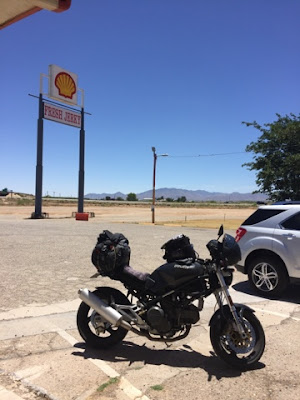 The scenery did help me. Wide desert areas with mountains and rocks. A few sand storms that crossed the road either in front or after me so luckily I didn't get caught in one. And only saw one tumbleweed. Those things are really scary when on a bike. So I kept my eyes open for them. I stopped a few more times to get gas or use the rest room but never longer than 10 minutes. And then, finally, I saw Las Cruces on the horizon.

Beth, my friend's friend who I am going to stay with in Marfa, my next stop, was already at the hotel when I checked in. For a while I was pretty useless, though. I felt like I had just finished another marathon and tried to process the day and rearrange my body and brain. A cold shower helped a lot with that as did a quick meal and a cold drink. And then Beth, Reece, a hitchhiker and aspiring voice artist who Beth had picked up in Marfa, Sally the cocker spaniel and I were on our way to White Sands Monument.

And it was certainly worth not to have given in to the overwhelming urge to crash in my hotel bed. 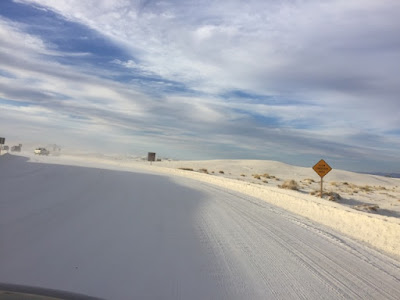 It looked like we were driving in the snow.  Dunes everywhere and the sun was about to set, partially covered by a bunch of strange clouds what promised to make the sunset even more spectacular than it was going to be already. 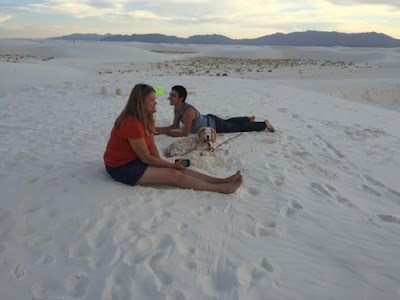 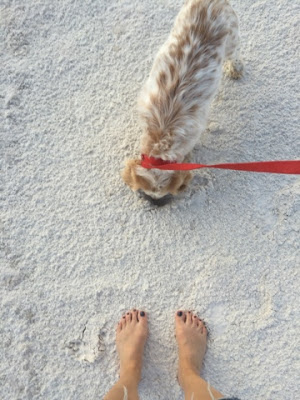 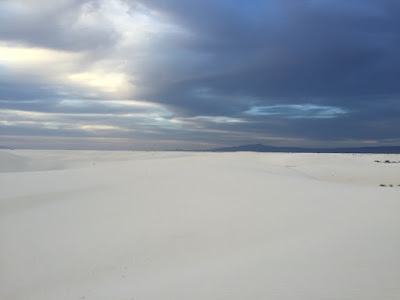 The sand felt cool and soft under our bare feet. There were people everywhere, families playing with their children, sliding down the dunes like on snow, barbecuing, or just watching the sunset and marveling at the views this magical place had to offer. 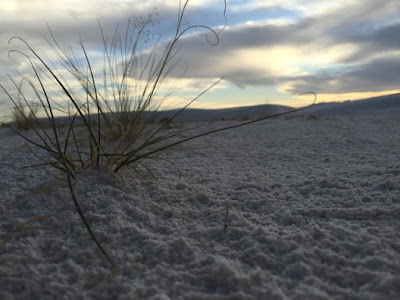 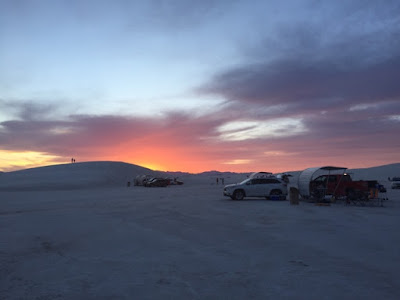 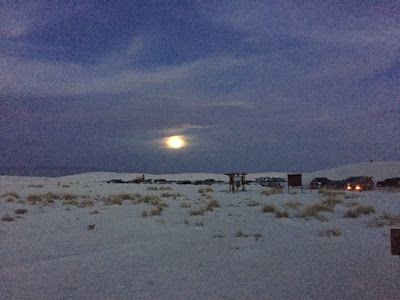 On the way back I had a really hard time keeping my eyes open and when I finally went to bed, I passed out within minutes and didn't wake up until the next morning. While I don't feel too bad today, and I'm a little proud of myself that I was able to pull this through, I don't think I want to do another killer ride like that. Good to know that I could if I had to, but going forward, 300 miles or less a day would be preferred.