"I almost died" is a bit of an exaggeration. And more of a running gag. Although it happened a few times yesterday and today. Yesterday I left Kingman to ride on I40 to Flagstaff. A relatively short ride of about 140 miles. When I strapped my large bag on my back seat, which is getting harder every day as this fucking thing seems to be getting bigger and heavier with every day, I accidentally let go of one of the bungee cords and it hit me on my lower lip (almost died #1). For a moment I thought, I'd lose consciousness but after a few deep breaths I realized I hadn't and that, while it hurt, no blood was flowing. I continued packing and entered the interstate. I stopped for lunch in Seligman on the Route 66 before I got on the last part of the leg. 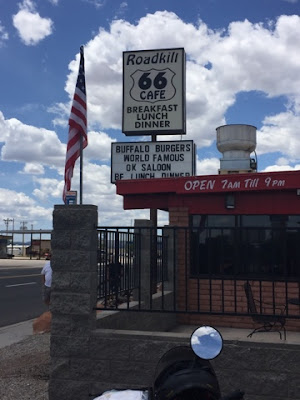 The scenery had changed again and I was looking at the vast red and greenish landscape of Arizona. The San Francisco mountains already visible at the horizon. It was pretty windy and I had fun jumping a little to the left, every time I passed a big truck. There was also a lot of debris on the shoulder and even in the lanes, mostly parts of tires. One time, not sure how exactly it happened, one such part got picked up by the wind and hit me at full speed on my right leg. I was too surprised to do anything than riding ahead (almost died #2).

Eventually I made it to Flagstaff and a beautiful AirBnB place in the pine trees. Flagstaff is certainly a city I could imagine to live in. Beautiful nature, parks and trails everywhere. Actual houses with yards all around them instead of a tiny piece in the back, a mere 80 miles from Grand Canyon, winter and summer sports en mass, and plenty of beautiful roads for riding. And really nice people.

This morning I left to ride up to the Grand Canyon. I had been there before but I figured, it would fit in nicely with this trip. The road from Flagstaff to the road that goes straight to the gate was empty and beautiful. Pines left and right, alternating with shrubs and grass, and a constant view of the snow capped mountain.

Eventually, I entered the park and got to the first viewing point. And, as before, it took my breath away. There are just no words to describe this view. I didn't even care that my hair was all over the place when this photo got taken. 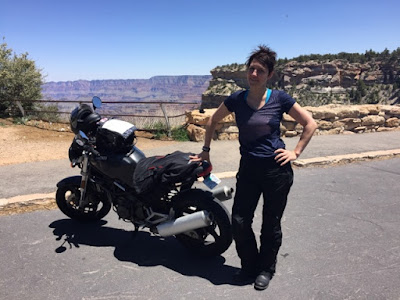 My host had recommended to go to a viewing point that required to hike a mile each way. Which meant that hardly any people went there. Enough to have my pictures taken by some of them though. 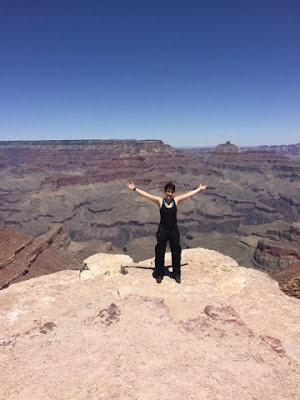 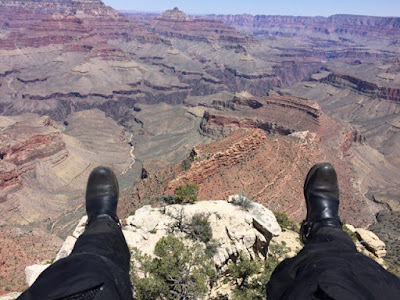 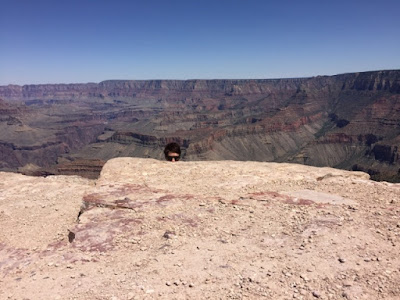 I sat there for a while, soaking it all in. It had definitely been worth the 20 minutes hike in my gear. In situations like these I'm always glad that I don't have vertigo. It would have been a shame not to be able to walk so far out and enjoy this view. I had a little bit of a hard time to convince myself that I was not dreaming, though. Thankfully, I made it. I just hope I'll dream of being at the Canyon again tonight so that I can follow those crazy swallows who kamikaze sailed over the rim. Being able to fly over and into the Grand Canyon would have been even better than riding to and alongside it.

I continued east on highway 64 and couldn't even begin to digest what I saw. The desert and canyons in all shades of red, pink and yellow. As far and much farther as I could see. Curves and turns and an even more beautiful scenery behind each curve. Instead of going straight back to Flagstaff I did a detour on 545, along Sunset Crater, which had created a huge and pretty lava landscape. I had no car in front or behind me for almost 50 miles. Just Arizona. 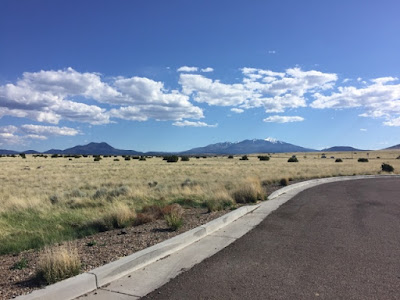 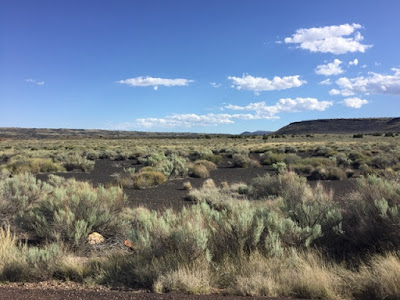 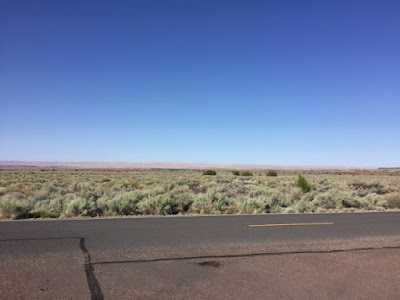 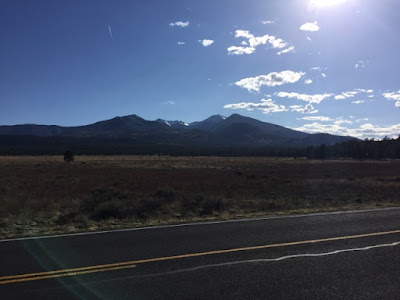 At that point, after several hours and over 200 miles of riding, I had trouble focusing my eyes. I think they'd just seen to much and were begging me to close them so they could process instead of bombing them with even more views. Plus, I was hungry like a wolf. Back in Flagstaff I ate two massive slices of pizza and wanted to ride home.

When I was about to put on my helmet, I felt this burning pain on the side of my throat. I wasn't sure if it was a tic so I asked a guy who walked past me. He took a look and then a step back and said, slightly scared "It's a bee." And then he tried to brush it off my neck. Still looking afraid. 'Dude', I thought, 'It's already stung me so it is certainly NOT going to sting you, too!' But I didn't say anything and tried to figure out whether I was still able to breath. Bee stings in the throat area are nothing to joke about. And I almost died #3. Sadly, the bee did. Which is, for me, always the worst part of getting stung by one. R.I.P. little bee. I'll wear the scar in your memory.

Time to go home and to bed, I thought, which I did.