No more riding until Thursday. I'm in Phoenix, staying with my former colleague's sister. It's a really nice place with a pool. Which is a good thing, given that were talking highs of 93 F or 34 C. It's very dry, though and windy which makes it easier to deal with the heat.

Yesterday I spent a day in Winslow. The place with 'the corner'. It's funny, that every American seems to know the lyrics by heart but I had to listen to "Take it Easy" again to understand what "Standing at a corner in Winslow, Arizona" meant. And there's even a park and a statue and souvenir shops at that corner! 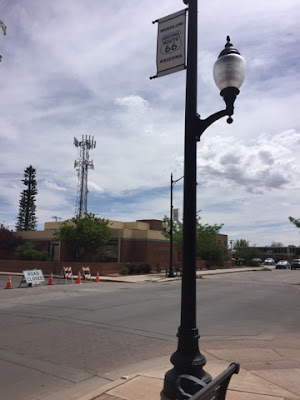 A random corner in Winslow, Arizona.

I'm trying to think of something similar in Germany or a similarly famous song, but all I can think of is "Auf der Reeperbahn nachts um halb Eins". And, indeed, there's a statue of the singer of that song, Hans Albers, at the "Hans Albers Platz" at the Reeperbahn in Hamburg. Well, Winslow is not like Hamburg at all.

In fact, once you walk away from the railway tracks, Route 66, and the beautiful La Posada Hotel you find yourself in a relatively run-down, poor looking place. However, what I loved about it was that, despite the initial shabbiness, many of the places had their own charme and seemed to defiantly oppose their descend. There were rose bushes everywhere, children's toys, surprisingly well kept gardens, cute porch swings. A lot of character behind the scenes was what made me like this little town a lot more than it's touristy side. 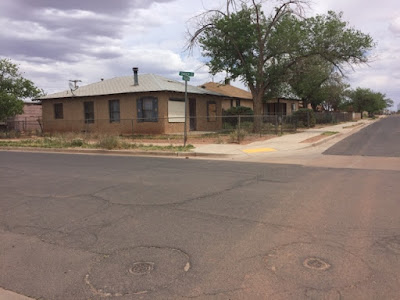 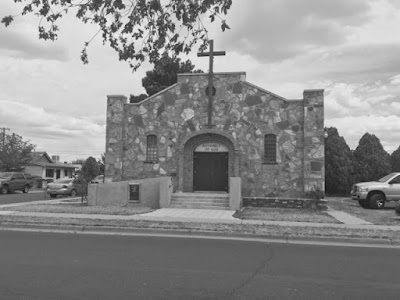 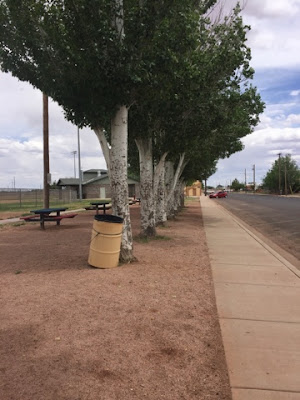 And then, of course, this little guy: 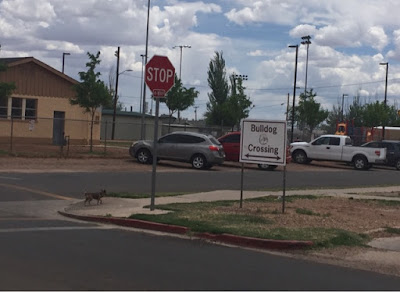 Following some recommendations from my friends at St. Anthony's in San Francicso and a guy I met at a coffee place in Flagstaff, I had lunch at the Turquoise Room at the La Posada Hotel. I'm always skeptic when it comes to American restaurants, Americans rave about. There's usually too much going on on my plate for my taste. Too many ingredients and flavors and the portions are too big. So I thought, I would bag half of the starter and entree I ordered and have it for dinner. But I got surprised by an actual starter sized plate of spicy-yummy calamari and a perfectly sized portobello burger with house made fries. The burger came with tapenade, which I usually don't like. Black olives taste like an Italian house smells like. But that tapenade was perfect. And I ate it all.

Either way, after lunch (I paid $66,66 on Route 66...) I walked home slowly. It had been way too much food, given that I had lived off of almonds, carrots, tomatoes, and hummus the last few days. My body didn't really know what to do with all that food so it seemed to have shut down everything not needed for digestion. I was glad, I didn't have to ride any farther that day.

This morning, I got up at 5am as I needed to be in Phoenix by 10am and I can never exactly go by what Maps tells me as I need to stop more often with the bike and might have to adjust my speed depending on weather and road conditions.

It started out nicely. On I40 west to Flagstaff. Once I got to Flagstaff and turned on I17 south, however, which is way higher as Winslow and Phoenix, the temperature was in the 40ies (3-6 C). Eventually, after about 20 miles, I had to stop and warm up my fingers that were about to freeze and fall off. Once I got to the point, where the road descended drastically, it got warmer every second. The view from the top, however, was unbeatable. 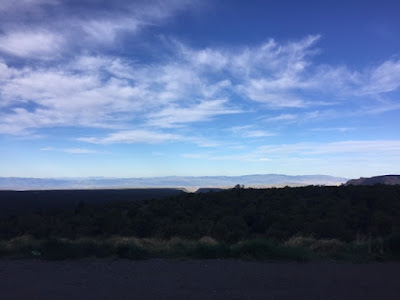 It was good that I had started early. By the time I got to Phoenix, 9am, it was already as high as in the 80ies (24 C) and I would have had to stop soon to shed some layers. But at least, toes and fingers had come back to life, even though the fingers kept hurting for a little longer. Well, I'm sure that I will think of this ride a lot once I'm deeper in the south and farther east and am getting cooked on the road...

But till then, I'm enjoying and air-conditioned place with pool and airy balcony, sweet hospitality, home cooked food and whatever else this city has to offer. 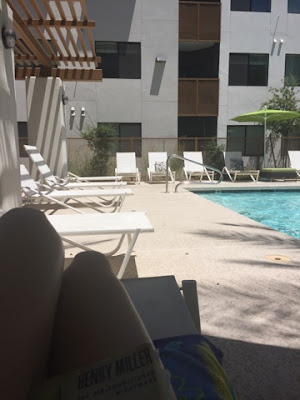