Today, wanted to get up at 5am and ride into the sunrise. But then, as usually when I know I have to get up early, I couldn't fall asleep, had weird dreams and kept waking up. One of my dreams included a gang of hungry, skinny grizzly bears raging in a village, mauling everyone who got in their way until I managed to tame them by swinging back and forth on a huge chandelier, singing the "Biene Maja" theme song, my head covered in dreadlocks made of pink studded leather belts. Have fun interpretating that one!

Anyway, after two hours of sleep at 3.30am I decided to postpone the sunrise riding to another day and get a few hours more sleep, given that I had to ride more than 250 miles today.

Luckily, it wasn't too hot when I left but nevertheless, I was sweating already when I hit the road. The roads where long straight stretches through agricultural fields, some of them abandoned. I guess it got too expensive to grow water intense crops in the desert. So unexpected. And of course, climate change is a big fat lie.

When I rode through the Imperial Dunes Park, I saw a viewing point to my right and turned right to drive up there. The scenery was beautiful but you weren't allowed to stop on the shoulder so I wanted to drive up there and take a picture. I noticed a large group of Harleys  that were parked at the view point and thought it might be nice to socialize with some bikers. Well, that did not work out as expected.

There was a sand drift on the road up to the stop and, instead of parking my bike at the bottom of it and walk up the rest I tried to ride through it. After all, all of the other, much heavier bikes had managed, too, no? Bad idea. And worse, I tend to stick to my bad ideas until it's too late. Long past I had realized they were bad. Like not breaking up with an idiot boyfriend... Long story short, I had to drop the bike. It has happened before and as before, nothing broke and the bike and me were fine. However, if it has to happen, I prefer smaller audiences. I saw the riders see me while I removed my bags and tried to lift up the bike which was more difficult than usual thanks to the deep sand.

I was a little confused as none of the bikers moved to come help me. I mean, that's the first thing I'd do if I saw someone having problems. A couple even took pictures! Finally, one of them made it down the hill, slowly, to help me. The bike was already three quarters of the way up and he just pushed enough to get it all the way up. He didn't say anything and finally I realized that he didn't speak English. He was not American. Well, that explained their inactivity. As did the truck with the trailer that followed the group of shiny bikes that barely stopped to ask if I was okay. Dutch tourists! I bet that hardly anyone of them would have been able to help me fix my bike if something had happened. Nothing did, luckily, other than a bent gear switch and stuff that won't show up before long (once I have enough money to fix it from my travel journal book deal. Definitely not with a Dutch publishing house...).

To be clear, I have several lovely Dutch friends and colleagues and any other group from any other country could have done the same, but we've run into tons of Dutch tourists on our camping trips in Europe and they were always faster with their cameras than with helping you out. And above, it was such a stark contrast to last night's crowd who I cannot imagine would watch and take photos while someone needed help.

I checked the bike for leaks and other damage but other than a few more scratches and a bent gear shift, I couldn't  spot anything. I switched up and down with no problem and after riding a few yards, not hearing any weird sound I was assured that I could continue. Before I left, I went up that hill to the restroom and check out the view. The view wasn't even worth it. The dunes looked so much better from the highway! However, thanks to all the sweating during the incident, I felt cool when I finally was back on the bike, going 75 mph. 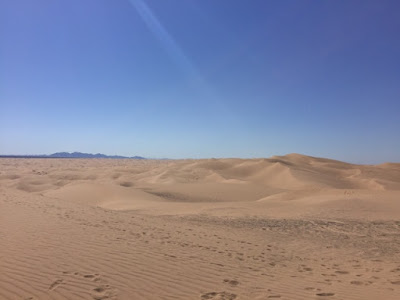 And further I went through farm roads, bugs hitting my visor so that I had to clean it at every gas stop. But then, finally, the roads and the view started to look like Arizona. Mountains, reddish rocks, canyons, and the blindingly blue Colorado River. After the dropping incident I didn't feel like stopping anymore but eventually, I got too hungry and stopped at a nicely air-conditioned coffee/bookstore. There I finally shed the extra layer I still carried, the wind breaker liner of my padded jacket, that kept the wind from coming in. As it was designed to do. Which turned out to not be useful at around 90 degrees Fahrenheit (32 Celsius). And suddenly I felt so much better. 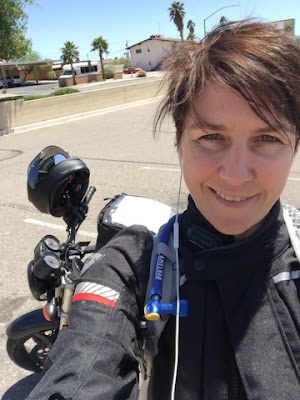 I only had 40 more miles to go on an Interstate with 75 mph speed limit. So I leaned on my tankbag and cooled down at 90 miles per hour and now I'm in an heavily air-conditioned room (switched it off hours ago and it's still freezing). Motel 6 on Route 66. I'm hoping, the Satanists won't be too loud tonight...