It's my last night in Phoenix and Arizona for now. Tomorrow at 6am I'll be on the road again, going east towards Las Cruces. There I will meet another sweet friend I don't know, yet who offered her home to me. She lives in Marfa but will meet me in Las Cruces and then we will go together to the White Sands National Park. I've seen plenty of photos and can't wait to go there. At night. With the full moon.

I'm excited and a little bit scared about tomorrow's ride. I don't like getting up early. It's kind of a necessity in the desert, though. At least if you want to get at least a few hours of riding in reasonable temperatures in. The ride will be my longest day trip so far. About 380 miles. I know I can do it but there's always a chance of something going wrong or me totally underestimating the length and difficulty of the ride. I know that the bike is ready for it. She was a little mopey during the week where I didn't get to ride her too much. 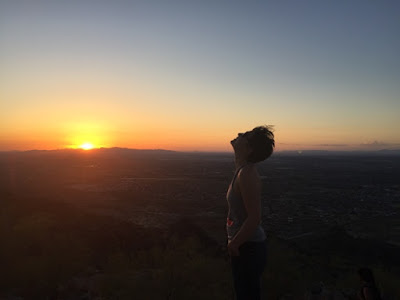 I'm going to miss this city. Susie and Bob, my hosts where so incredible hospitable and have become dear friends. This always makes it hard to leave. But also nice to know that there's now yet another home away from home in case I need it. I even went on a couple of dates and must say that, I like the men here. A lot more down to earth and normal and way less entitled than many in the Bay Area. Not all of them (especially you guys, who read this ;-)). The city is, while huge and incredibly hot in summer, quite pretty and thanks to tons of parks everywhere, consisting of deserts or rocky hills, it doesn't seem like just one moloch of a city. And, regarding the heat, I spent most winters in Hamburg inside because it was nastily cold and wet. People here just spend their summers inside to avoid getting boiled like eggs in the heat. I think I could live with that. Given that there are tons of lakes and Flagstaff ist just a few hours away and offers relief from the heat at 7,000 elevation.

Therefore, Phoenix made it on the list, as well. But now, I have to get some sleep and rest before tomorrow's marathon ride!